Evocative & Glamorous Fine Art | Connecting you to your Beauty

How You Can Become a Work of Art.

​  Glamour is best described as anything that possesses beauty, grace, mystery and has transcendence.  I use this very elegant definition to inspire and guide me in the creation of my photographic art. It can certainly also be applied to a variety of subjects and is not just limited to the imagery of women.  However, I am primarily a woman's photo artist, so that is the vast majority of what I create. 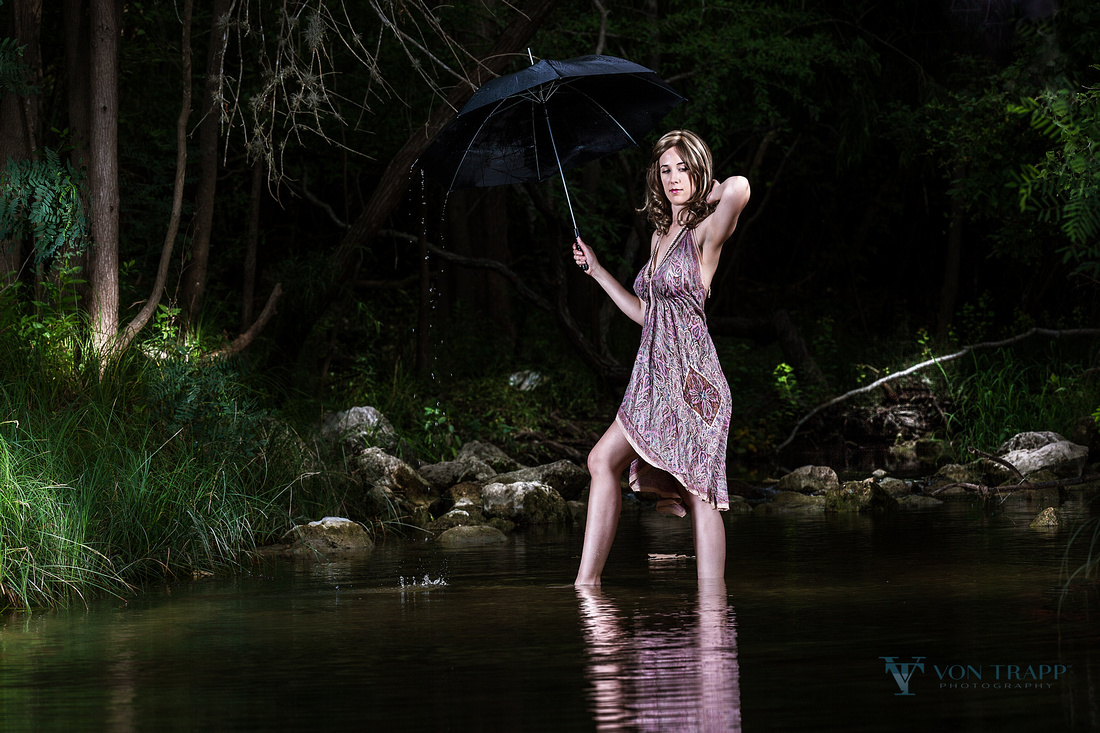 Lady in a Stream by Von Trapp Photography 2014 | Texas Glamour-BoudoirFine Art Glamour image using studio strobes to create the unique lighting of this scene. Its transcndent nature is atributited to the quality of light, and by the highlights and shadows; their creation made at the time of the capture, and in post-process.

Lady In A Stream  Fine art project to create a unique look to a well known location below the Canyon Lake Dam on the Guadalupe River.

The transcendent quality of the above capture is attributed to the light seen in the photo.  The mid-afternoon light is being augmented by 3 powerful studio strobes, which were carefully placed to create a precise look.  Then in post-production meticulous steps were taken to "paint" in each and every shadow and highlight seen in the final image.

Professional photo artists shoot in a format called RAW.  A pro grade camera with high quality "glass" (the lens) will record everything in the image that can be "captured" but the capture will need to be "developed".  This image will not even be able to be viewed without custom software to process the data that was recorded, and then make it viewable to the photographer on the camera's LCD screen on the back.  But this is only a low resolution image for viewing at that moment.  If the camera is not set or able to record anything other than JPEG, the captured image will be from the start of a lower quality compared to one in the RAW format.  This form of capture (RAW) insures the very highest quality of data recording at the time of exposure.

Now that the image has been artfully planned and crafted on set, and captured to the camera's memory, it is time to continue the magic of the photo artist "developing" the image.  The RAW image will now be viewed on a high grade large screen monitor that is frequently color calibrated with special soft and hardware to insure stunning results in the final print.  Again, special software is used to be able to see the photo for further artistic work.

In contrast - a snapshot that is taken in the normal JPEG format can be a good looking image.  But it can never match the brilliance, sharpness and quality of an artfully processed and styled creation made from a RAW capture.

The RAW image at this point looks drab and somewhat boring.  It is not ready for printing or viewing as a finished photo; it must be creatively developed into its potential beauty. 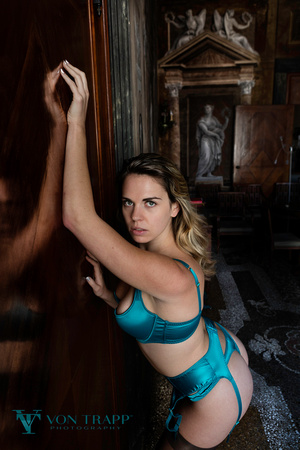 Intensity (RAW "Out of Camera" image) by Von Trapp Photography

This is a RAW image file.  Note the dull look to the image, this is normal for a RAW file.  It is unedited, not retouched, and not corrected in any way.  Nor has its look, coloring, or mood been styled in any way.  It is, by most standards, a very good image as it is,  professionally well crafted and lit to make the beginning of an outstanding image.  The original size of this file is a whopping 52.3 MB, which was made possible by the top of the line Canon EOS 5DS.

Now aided by a graphic pen tablet, such as a Wacom, the image is skillfully and ever painstakingly made.  The artist will use a pen-like device called a surface pen, to literarily "paint with light" as he manipulates the RAW image's data to show, or not, varying degrees of light, dark, highlights, shadows, contrast, color and so very much more. 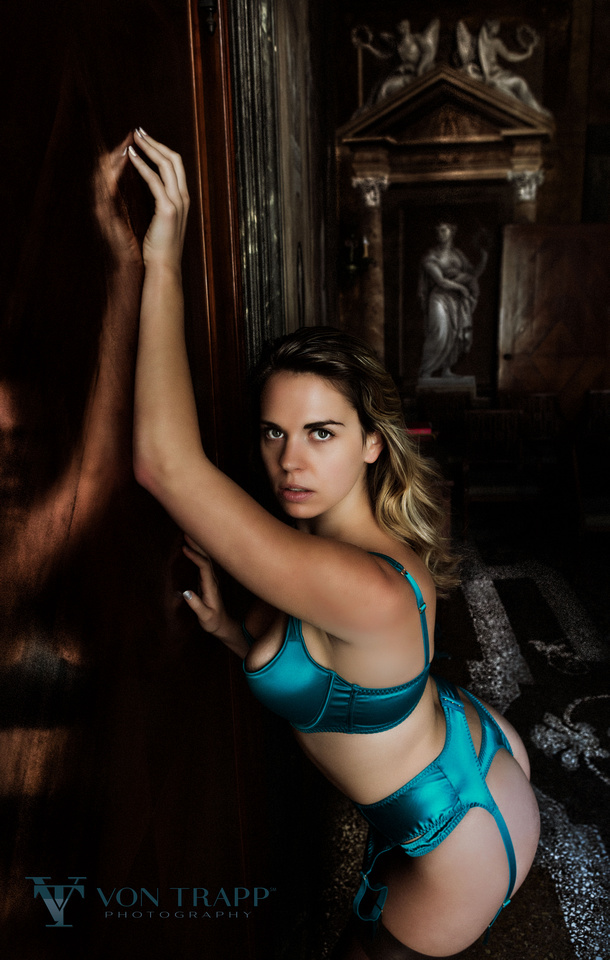 Final, fully-edited and styled image from our fashion shoot at the Palazzo Ca Zen in Venice Italy.  Canon EOS 5DS with 24-70 f2.8L lens.  The size of this file when it was converted from RAW to a Photoshop File for editing was 845.8MB!  That's a lot of data to work with to create beauty and glamour.

The great value to having invested in, as of June 2015, the world's largest megapixel SLR camera, is the ability to capture incredibly tack-sharp images that can than be enlarged to here-before unheard of sizes for a full frame 35mm SLR.  Even if I am not making billboard size images, having so much data on a file capture allows me to enlarge and crop an image without loss of image quality. 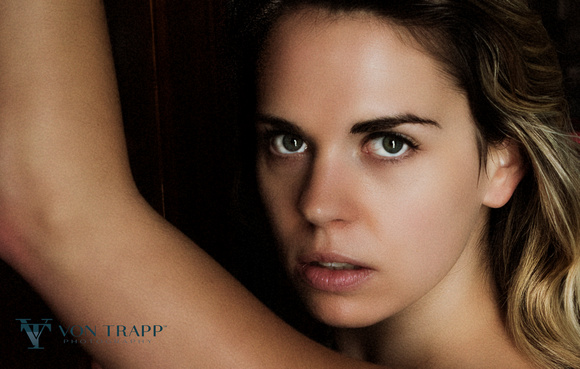 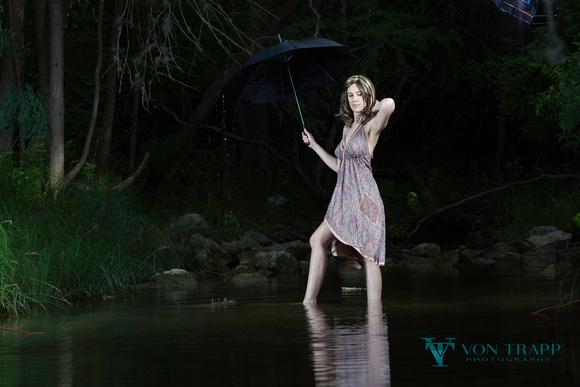 Lady In A Stream (RAW "Out of Camera" image)Here you see my RAW capture of what went on to be a stunning art piece.

The RAW capture of the above image.  Note the orange power cord entering the water at left, and exiting on the right where it goes to a Profoto D1, 1000w strobe mounted on a light stand with a beauty dish (upper left corner of photo).  The light stand has been weighted down with sandbags, and the power cord had been prepared/protected for its immersion into the river.  Again note the dull look to the unedited image.  Canon EOS 5D MkII with 24-70 f2.8L lens.

To create just one image that I will provide to a client or use in my portfolio, I will spend more than three hours crafting it.  This is after the three or more hours that it took to download, catalog, cull, rate, select, and do initial editing that includes cropping, basic exposure and other early steps; just to get to the point of selecting the very best captures for the final artistic rendition.

The price of your investment constitutes this time and effort plus the education, training, experience, equipment, and talent of the artist when you commission a project or purchase a photograph.  What you are really investing in is a work of art, crafted with precision and passion.

By choosing Von Trapp Photography, you will be teaming up with a photographer who seeks to find the glamour in the people, places, and objects that surround us.  Investing in a quality piece of fine art that has you as the subject will give you immeasurable joy and satisfaction.  Call us today and start your journey.