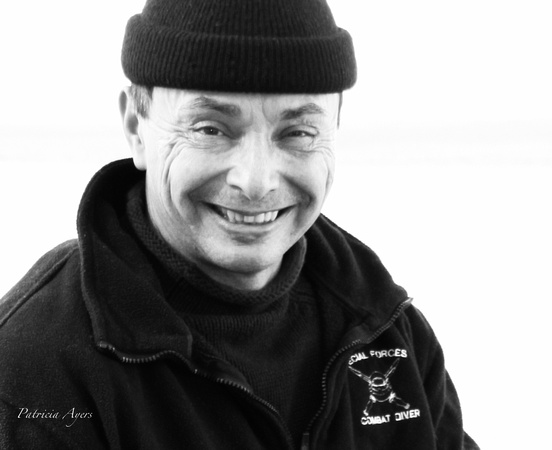 From Warrior to Artist.  Where I Have Been.

I had a highly successful 30 year career as a warrior in the army.  I started out as an Infantry Paratrooper and Pathfinder Team Leader in the 82nd Airborne.  Became a founding member of and instructor at the Special Forces Survival Evasion Resistance and Escape Course.  Finally serving as a Green Beret Weapons Leader, Medical Sergeant, Combat Diver and Dive Medical Technician. This is how I completed my first two decades of service.

My last 10 years started with my commissioning as an Army Officer, trained as a Physician Assistant.  With my degree in hand and gold bars on my shoulder, I was overnight a Second Lieutenant!  I had 5 years as a Master Sergeant at that time, and as anyone who has served as an enlisted person understands that was quite a demotion.  In prestige to say the least.  Thus started my third decade, now practicing primary care and combat medicine.

My final tour of service wrapped up with 3 years as an instructor and training team leader at Ft Sam Houston Texas.  I was set on this course by the Chief of Army PA's Lieutenant Colonel Lou Smith.  I first met, then Chief Warrant Officer 3, Lou Smith when I was a Sergeant First Class serving in Bad Tolz Germany assigned to the 1st Battalion 10th Special Forces Group.  He noticed my passion for teaching and saw the quality of my work as the primary creator and senior instructor of the NATO International Long Range Reconnaissance and Patrol Medic Course given in Wiengarten Germany.  Now in the summer of 2001, LTC Smith charged me with bringing a combat mindset to the hospital world of Fort Sam medic training.  The army was finally changing its mindset of how medics were to be trained.  No longer was a hospital to be the primary emphasis.  The new 91W course was to create a Combat Medic from the ground up.  The techniques and training philosophy of the Special Operations world needed to be brought to the conventional army.  As the events of history would have it, just in time.  In my three years at Fort Sam, I and my nurse instructor with our 20 outstanding sergeants instructed some 4000 students.  We were but one of 6 such teams.

Two years prior to retirement from service I earned my scuba instructor certification with the prestigious National Association of Underwater Instructors (NAUI) and have gone on to become a Mixed-Gas Technical, Open and Closed Circuit Instructor.  I had been able, while still in the Army and then into "retirement", to  expanded on my diving roots.  I became a technical diver with ratings as a mixed gas open circuit, closed circuit (rebreather) and technical wreck penetration diver, whice along with my medical and other army provided skills, afforded me the next career opportunity.

During the spring and summers of 2005 through 2011, I crewed aboard a research vessel in the Florida Keys.  I worked as Diving Officer, Deck Chief, Security and Medical Officer as well as deck hand, fetch and carry, cook, bottle washer and the coveted "head" custodian (bathroom janitor).  It afforded me great opportunity to do, see and be part of many miraculous projects and adventures.

I continue to teach SCUBA diving today as a Technical Diving Instructor, and have found even greater rewards doing considerable pro-bono work with the Wounded Warriors teaching Adaptive Diving classes to our amputees and injured soldiers.  They are an incredibly easy group to teach diving too.  Having come through such adversity, what's a little water and lack of air!

After much thought and consideration I then decided to start career number four and return to photography.  I first joyfully started learning it in grade school and continued in high school studying graphic arts.  Now it is time to become a professional.

Since that that choice I challange myself each day to expand my skills as a photographer.  Along with my client shoots, I travel each year to shoot personal projects in fashion, editorial and art nude around the world in-order to add to my portfolio and knowledge.

This web site is among my first big steps to break into that world.  Thank you for taking interest and the time to visit with me.  I hope that you will return often and perhaps afford me the chance to serve your photographic needs.

I am available for travel out of town and out of country.