Living Like a Resident of Venice | Glamour Shoot in Italy

Living and Shooting in Splendor...My days as a resident of Venice. But first must come the work. Part 1

We just returned from Europe where Von Trapp Photography spent 4 incredible days and nights shooting and living in the Ca Zeno Palazzo, of Venice Italy.  I have visited Venice many times in the 80's and 90's, but even on extended visits I never got the chance to feel like I lived there.  A hotel room, even the nicest ones, can only offer to one the experience of Venice as a visitor.

Ca Zeno belongs to the direct descendant of the noble family Gradenigo which produced several leaders of Venice, the Doge, starting with Pietro Gradenigo in the late 13th century.  His namesake is the current owner today.  The residence is a grand apartment in the building of the once palace, located in the Cannaregio Quarter of Northern Venice.

The crew and I arrived at the Palazzo via water taxi in the early evening.  The ride to the residence afforded everyone the chance to view the glamour of the Grand Cannal after sunset, with all its stately facades beautifully illuminated .  Upon entering the residence the grandeur of our surroundings struck me deeply, and despite my fatigue after nearly 20 hours of travel I roamed the residence slack-jawed gazing upon the frescos, marble and stone of the various rooms. I then mustered a final surge of energy to unpack the 3 large bags of photo equipment, wardrobe, and props that we brought, and after giving a final briefing to everyone about tomorrow's shoot, I wandered off to my palatial bedroom to pass out. 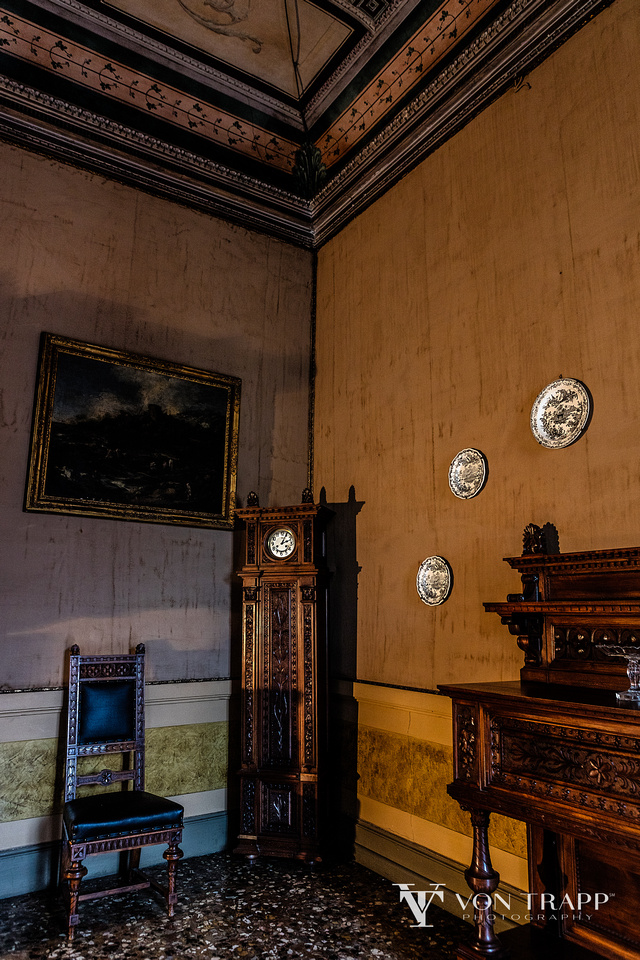 Corner of the dining room in the noble Venetian palazzo Ca Zen.

The next morning started early near sunrise.  I awoke, like in all cities, to the sounds of the streets comming alive with the activity of another day.  In this case, of course, the streets were canals, and the sounds were that of boats moving along the waterway below our balconied windows instead of automobiles.  As my eyes came into focus I gazed upon the frescoed ceiling some 16 feet above my bed.  A hint of the cool blue light of morning peeked in around the shutters of the tall windows and french doors of my room.  I heard the sound of a woman's heels upon the stone of the walkway just outside.  A man's voice, speaking Italian, echoed through the narrow passage ways of the canals.  Then, I detected it!  The marvelous aroma of Italian coffee floating upon the gentle breeze being blown down the hall with the aid of some morning wind coming in through an open window of the kitchen.

Production Assistant Pat, always an early riser, was tasked to put together breakfast for what will be a early and long day of shooting.  "What a wonderful life" I thought. 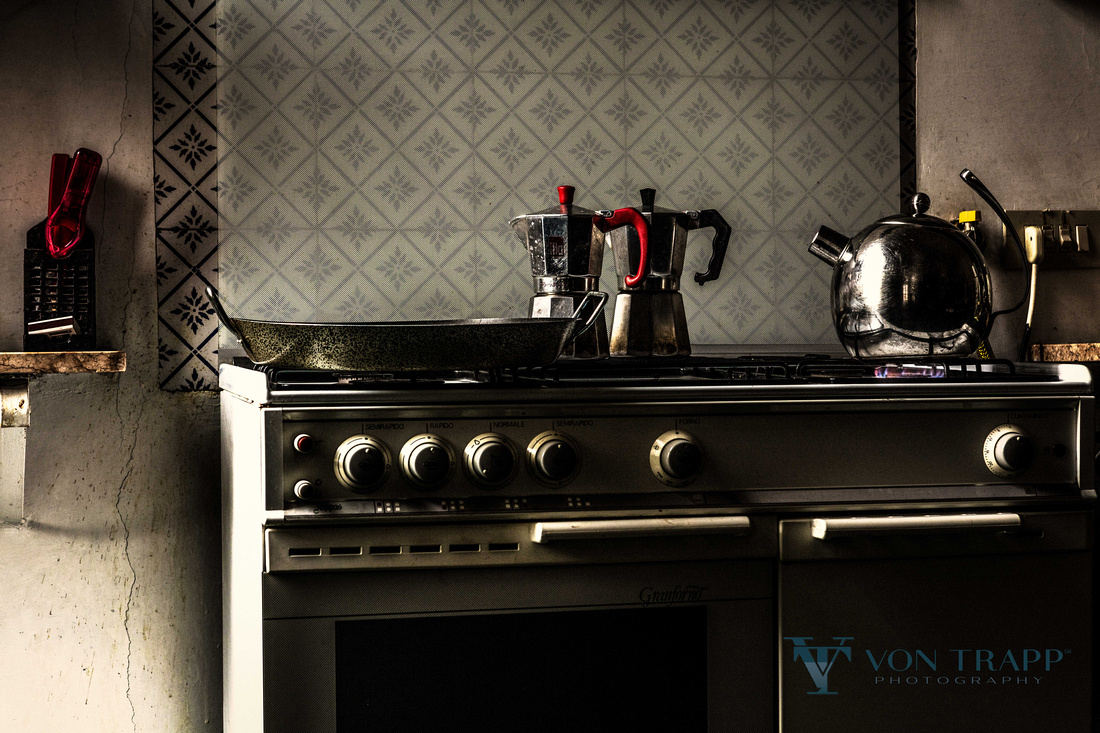 The ubiquitous Italian coffee pot.  I love mine which has journeyed with me in my rucksack during my Green Beret years when the mission allowed, despite adding to the already 100 pounds of "lightweight gear" of essential kit. 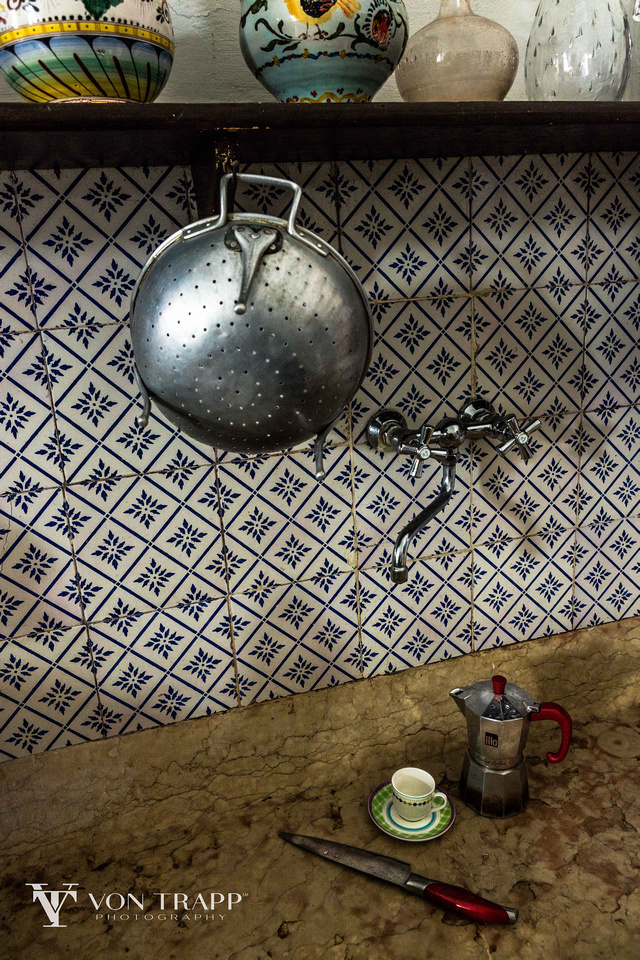 It was a quick colazione (breakfast) and coffee for model Nicole and I prior to setting off for the first two shot setups of the morning.  During our time in Venice we had planned to create several different images of fashion, art nude, lingerie glamour and fashion editorial.  Sadly for her, she only indulged in a very light amount of food since her first two setups were to be fashion nudes.

We started off shooting at the entranceway and staircase to the apartments.  The available light was stunning in many of the shooting locations and this entranceway was no exception. 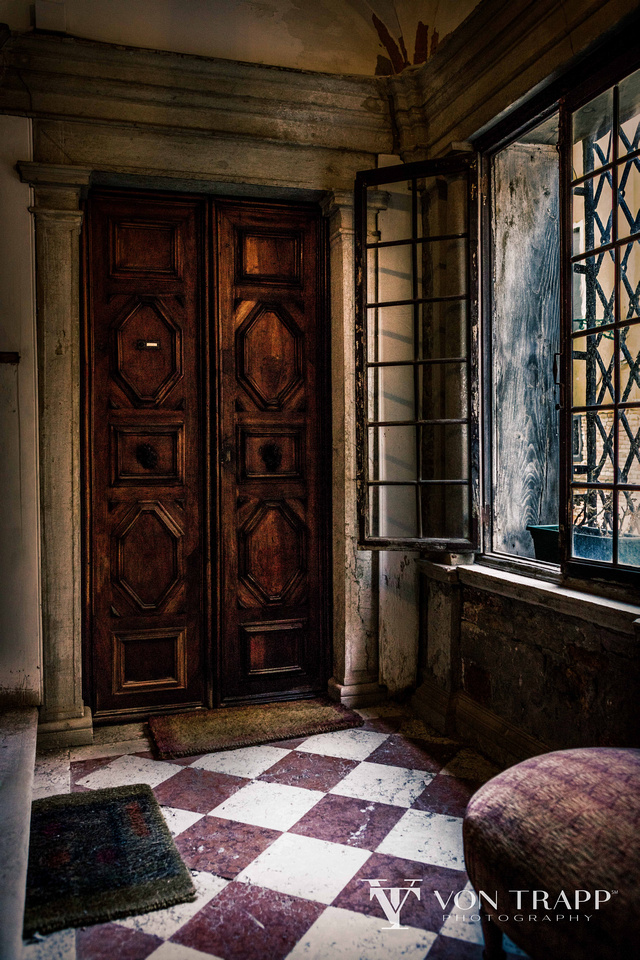 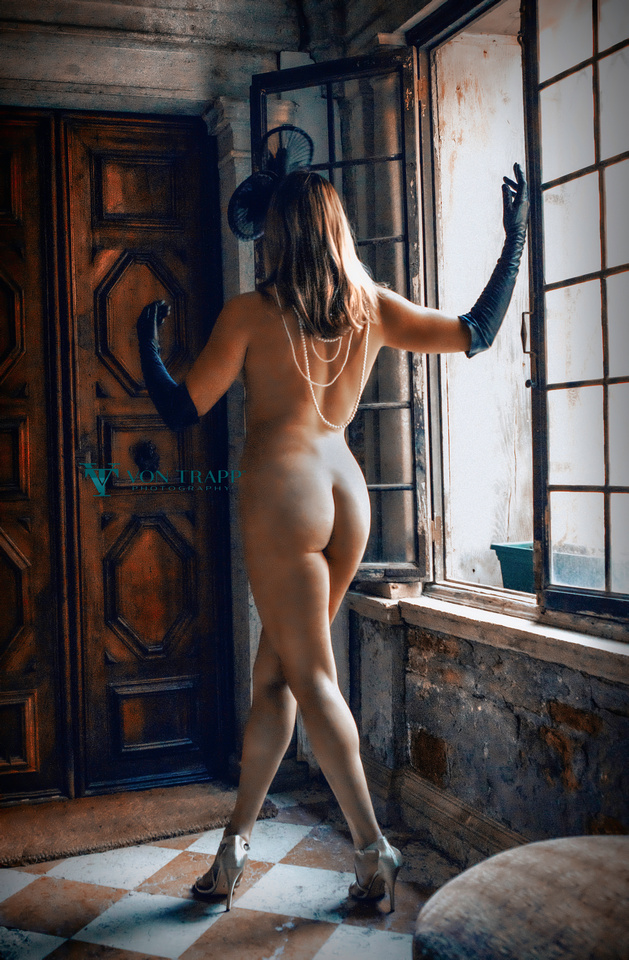 Nude At The Door v.1a by Von Trapp Photography 2015.Our model shows up at the door, to our delight, dressed ready for the ball. Sexy glamour shoot in Venice Italy at palazzo Ca Zen. 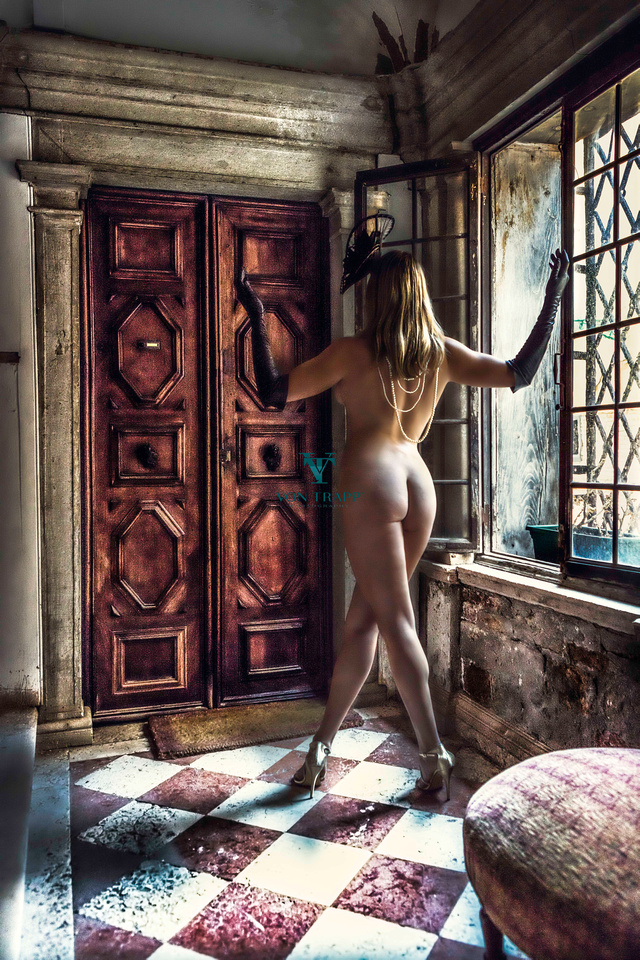 Going To A Party v.3 by Von Trapp Photography 2015.Nicole arrives well dressed for a party. Fashion image taken in the enterance way of the Italian Palazzo Ca Zen.

All the while back at the apartment, wardrobe and props were being organized by the crew for the rest of that day's shooting.  Photos here at the entrance completed, we returned to the kitchen for a real breakfast using that time to also do hair and makeup.

The rest of this day, lasting up to sunset was filled with wardrobe, jewelry, hair, and makeup changes, changes of set location throughout the palazzo and outside in the local area.  All under the unrelenting pressure of the clock.

Planning The Shoot...Put on another pot of coffee! "Maybe I will have tea this time".

We came to Italy with an ambitious plan which was laid out in painstaking detail back home in Texas over the preceeding months. Concept and mood boards were created, just like we do for all of our client shoots, except this project was larger in its scope and to be completed seven time zones away.

Like any large project that is professionally conducted planning was the key.  I thought I was back on an Special Forces "A team" planning an infiltration into some part of the world.  In fact we were sort of doing just that. 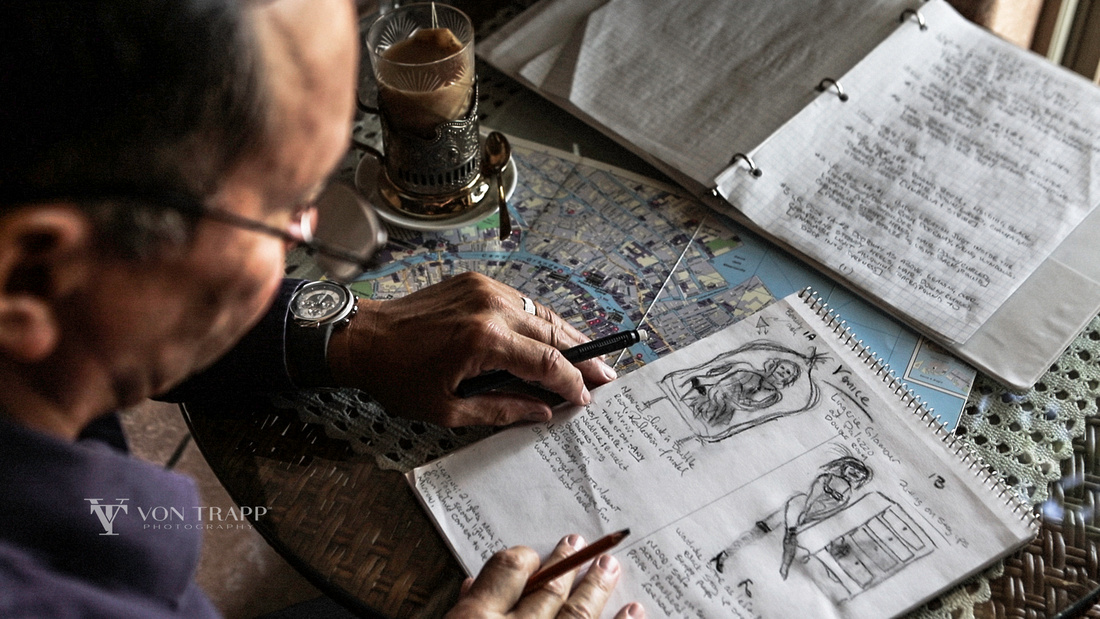 Photo Artist Richard pulling together details of the shoot, creating a "story board" and shot list to mach up with the written description of each planned image.  The next two photos are the result of the left sketch (#1A and 1B) above.

Getting four people to one location in Europe coming from three widely separate locations in the states was the easy part.  Despite several airline schedule changes over the months prior, and potential hurricane development from socking in departures from Houston or Ft Lauderdale, that part proved not to be a problem.

What was given great consideration was first the overall concept, theme, feel, mood and look of the desired images to be created.  Whatever was decided upon would have to fit the look of our model, the location and time of year, what wardrobe and props could be sourced, the time available and so much more.  Even such things as meteorological and astrological variables were researched and considered, both historical and currently forecasted.  Sunrise and sunset along with the forecasted positions and angle of the sun at a given time of the day were factored into where we would shoot and when.  I used satellite imagery to help me see where the sun would be in the sky, and to help me decide what the light would likely be in a given room or location at a given time of the day.

We had images of most of the rooms of the Palazzo which were of great help in planning each shot.  But having never seen it in person many questions and potential problems still loomed.  But the largest and most nagging spector to materialize and follow me all the way through this process, right up to the completion of shooting, was that of time!  Would I have enough time to complete all of my desired and meticulously planned shots?

As I found inspiration I selected locations for each shot or designed the shot to fit each site.  Wardrobe and accessories were sourced and selected, hair and make up were considered.  Countless revisions and culling of ideas were conducted as different issues came to light.  Finally enough planning was conducted that it was possible to detail each shot, and we created both a written description list and either a sketch or photo inspiration of each image to be created.  I had already ruthlessly culled some 15 images from the total in the eleventh hour so that I could proceed to this final step of sketching, which can be seen in the photo above.  But I was hard pressed to do so, I loved these 15 ideas!  Once I did, however, the proverbial weight was lessened from my mind.  My spector still remained, however, now quietly whispering instead of yelling, "time, you will not have enough time". 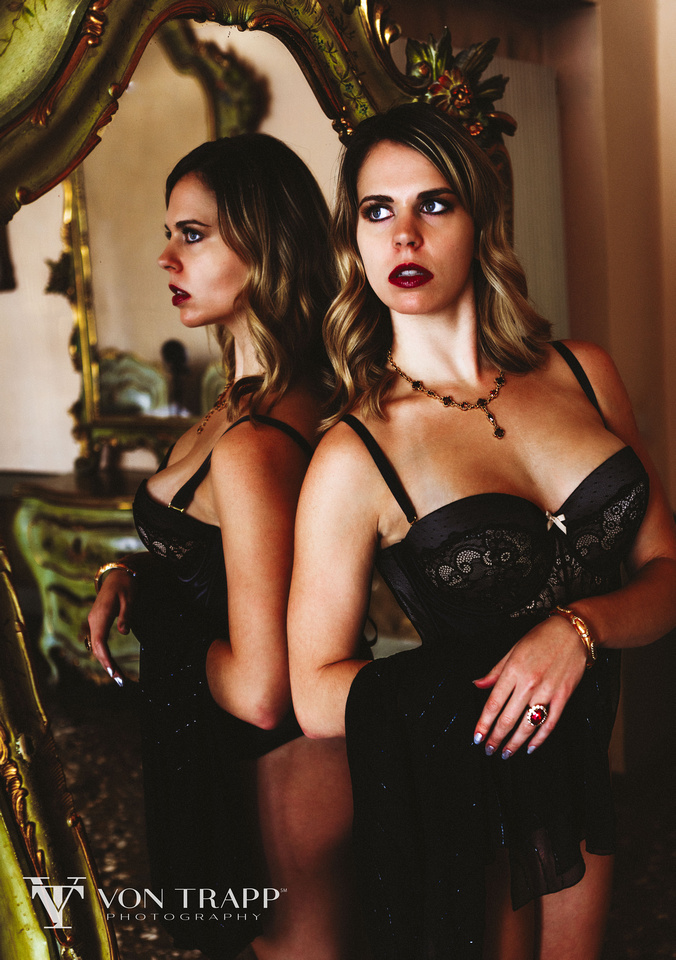 Mirrored Glamour by Von Trapp Photography 2015Mirrored Glamour, Beauty Reflected. This capture was made in a grand bedroom of a nobel residence in Venice Italy. The period furniture, 20 foot frescoed celling and French doored balcony, overlooking a canal, created an inspirational location for this evocative lingerie glamour photograph. 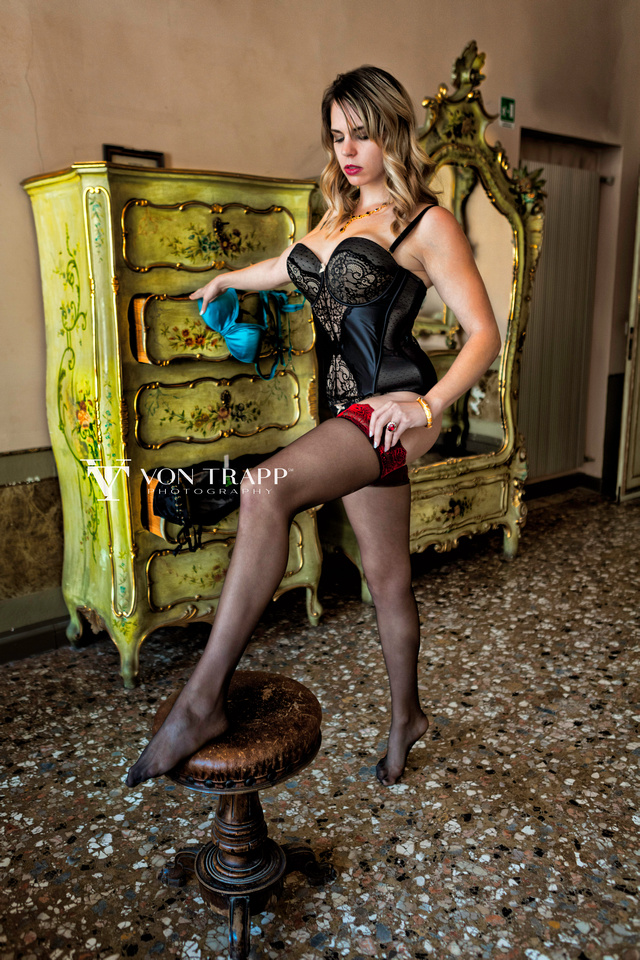 Her Red Velvet Lace v.1 by Von Trapp Photography 2015.This capture was made in a grand bedroom of a noble residence in Venice Italy. The period furniture, 20 foot frescoed celling and French doored balcony, overlooking a canal, created an inspirational location for this evocative lingerie glamour photograph.

As it turned out we did indeed have enough time.  The planning and estimating of what it might take for each set-up, shot, location/wardrobe change and resetting of the lighting was satisfyingly close to what it finally turned out to be on set.  The dedicated work of my photography assistant and production assistant, along with the endurance of our model to push through a challenging schedule made it all happen.  But it started with a dream, a vision and a solid plan. 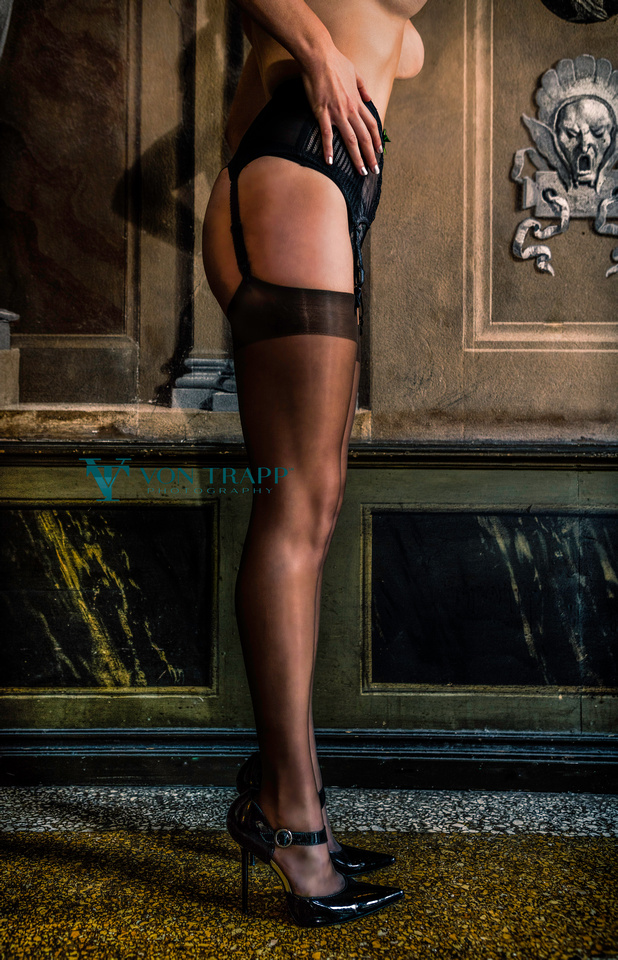 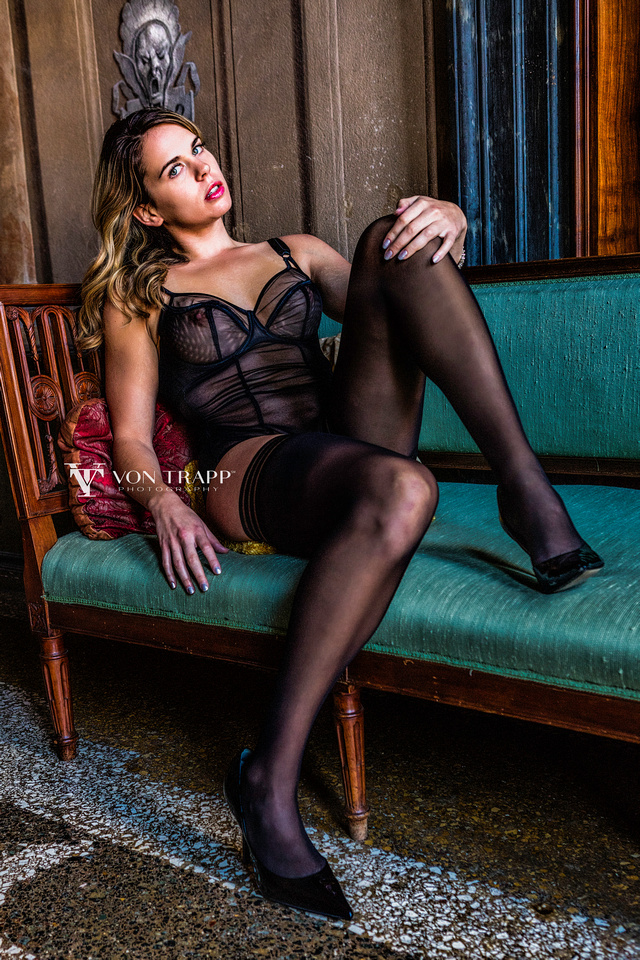 Nicole A Leg Up v.1a by Von Trapp Photography 2015.A morning with Nicole in the Palazzo Ca Zen. Venice fashion glamour shoot in Italy. 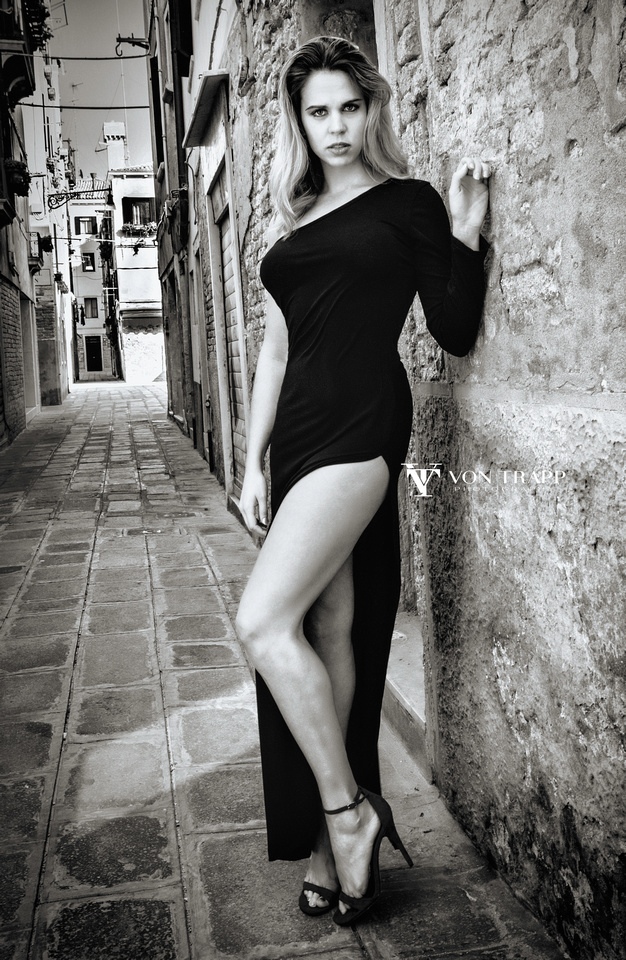 Back Streets v.2 by Von Trapp Photography 2015.Photo shoot with Nicole in Venice.

With day one finished, each of us went on, after a short rest, to go shopping for food at a local market and bring our delicacies back to the apartment for that night and the next day.  We decided to "visit" the main tourist side of the city, wandering through the alleyways to St Mark's Square some 20 minutes away.  I casually lead the group...making a turn here...stopping at an interesting location there, seeming as if I knew where I was at all times.  In fact it was 1999 when I last visited from my military posting in Germany.  But it all came back to me despite some moments of frantically trying to recall my previous adventures here, but most in the group were none the wiser.

​  My sincere appreciation to everyone involved in this project.  I hope that you the reader will return to view the results of this undertaking in the weeks to come as I work through the next step in the creative process, that of post processing and artistic styling of the images.

Follow this link to a romantic video of this most lovely city.

Open your mind and heart, travel and know the joy of becoming a citizen of the world.

One's life can be comprised of many things...perhaps the most important of which is learning and growing.

We are a couture photo-artistry service that produces uniquely beautiful photographs that emotionally transport the viewer. Serving the San Antonio, Austin, Dallas and Houston metropolitan areas and beyond.